I was given the gift of an abundant amount of zucchini (courgettes). So instead of making endless stir-fry with it, I decided to make some pan fried cakes using the shredded squash. They’re almost like latkes, but with chunks of garlic and onions in it. 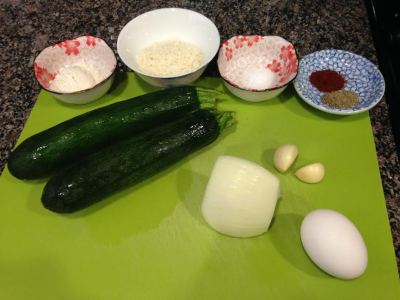 Gather your ingredients, which isn’t much. Two medium sized squashes, two cloves of garlic, a quarter of an onion, an egg, flour, breadcrumbs, salt, paprika, and black pepper. You can use regular or seasoned breadcrumbs, but all I had in my pantry was panko breadcrumbs, so I used those instead.

The first thing you do is to grate the zucchini with the large holes in a box grater. If you’re doubling the recipe, you may want to use your food processor to make this go faster. But since I was only using two, this doesn’t take much time at all. 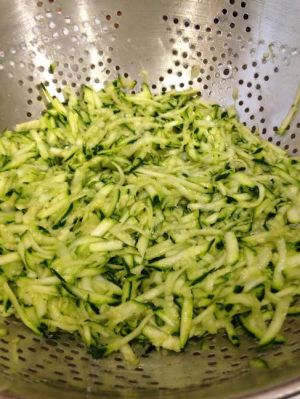 After you got them all shredded up, you put it into a colander set over a bowl. Then you mix in the salt and let it sit for an hour. The salt will help draw out the moisture because you want them to be dry as possible, or you’ll get mushy cakes.

After an hour, you press and squeeze all the water you can from the shredded zucchini, then you put the pulp into a bowl. Mix in the onions, garlic and egg until well combined.

After the egg is combined to coat everything, you mix in the flour, spices, and breadcrumbs. Mix until it’s all combined and moistened with no dry spots. The mixture should be easily formed or pressed into a shape.

Once you have everything mixed together, heat up some oil in a nonstick frying pan over medium heat for about two minutes. Then turn the heat to medium low. Heap in some of the mixture and form into a patty, letting it cook on each side for about 5 minutes. This will ensure that it’s cooked all the way through, but has a nice and crispy crust on it. Serve and eat immediately for ultimate deliciousness. 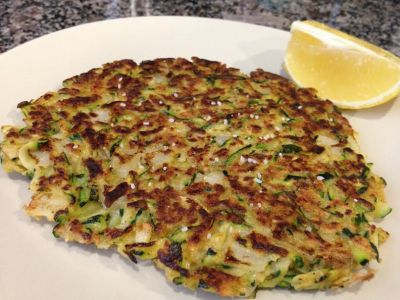 I like to serve mine with a little extra sprinkle of salt (not too much since the zucchini was salted already) and a fresh squish of lemon juice. This recipe makes about four of these cakes.