When I travel, I do my absolute best to eat what is offered regionally and what the areas are known for – this is especially true when I travel internationally. I just returned from Scotland, where I tried my absolute best to eat more than my stomach could ever hold. I’ve eaten things I never thought I would’ve eaten, I’ve changed my mind about certain foods, and I had the chance to taste something I’ve been dreaming about eating for years. So, here are some of the highlights of what I’ve consumed while in Scotland! 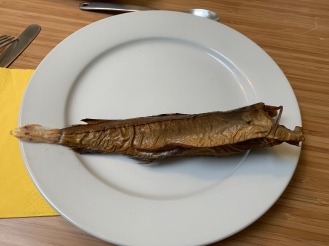 First, I have to talk about the Arbroath smokie. This is a smoked haddock that is salted and dried overnight before being smoked in a semi-sealed barrel over a hot fire. It’s a specialty that the town of Arbroath is known for and the methods used to create this date back to the 1800s. I have always wanted to try this since I first saw it on a video that was showcasing various foods from around the world. I love seafood and fish, so this sounded like something I would really enjoy…and I was not disappointed.

Arbroath is a beautiful town on the coast and there are a lot of shops or smokeries that sell the smokie. My friend, Kate, and I were able to buy some and have them for dinner that night. They are delicious without a heavy smoke flavor, they’re not too salty, they’re not super dry, and everything about them is perfect. Just watch out for the little bones since this is served mostly whole with the bones still in it. My only regret is that I wasn’t able to bring any of them home due to a blunder of improper storage while we were traveling around. PS – the smoked salmon we got along with the smokie was absolute perfection.

The next food that I fell in love with was cullen skink. When I first saw this, it was an offering at a pub and inn built in 1739 along Findhorn Bay. The menu didn’t say much aside from it was a soup and the name gives no hints to what it might be, but I wanted to try it – especially after having spent a few hours in some cold rain while beach combing for treasures. I honestly wasn’t sure what to expect.

Turns out, it’s a soup with smoked haddock, onions, and potatoes as well as some herbs and seasoning, but very lightly so as not to overshadow the other ingredients.  It’s also thickened with mashed potatoes that are stirred in. It’s simple and something that might seem like outdated home cooking, but it was perfection. Filling, delicious, tasty, comforting, and warming – I’m officially obsessed with cullen skink and am currently trying to find smoked haddock where I live so I can make this as soon as possible.

I had cullen skink days later at a restaurant and the broth was thickened with cream instead of mashed potatoes. It wasn’t as delicious as it was compared to the first place I had it, but still tasty. 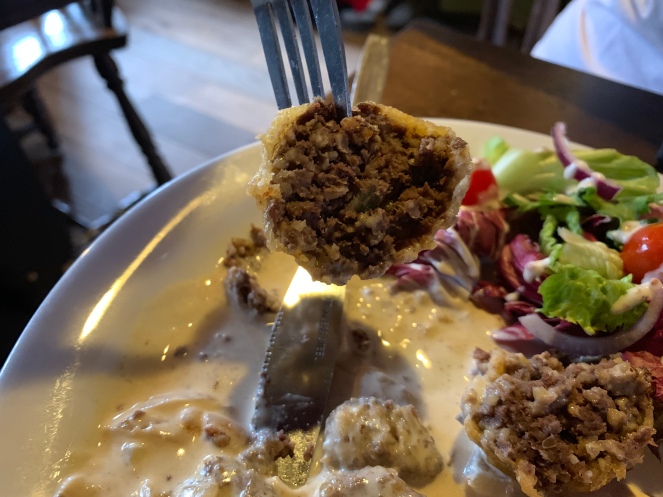 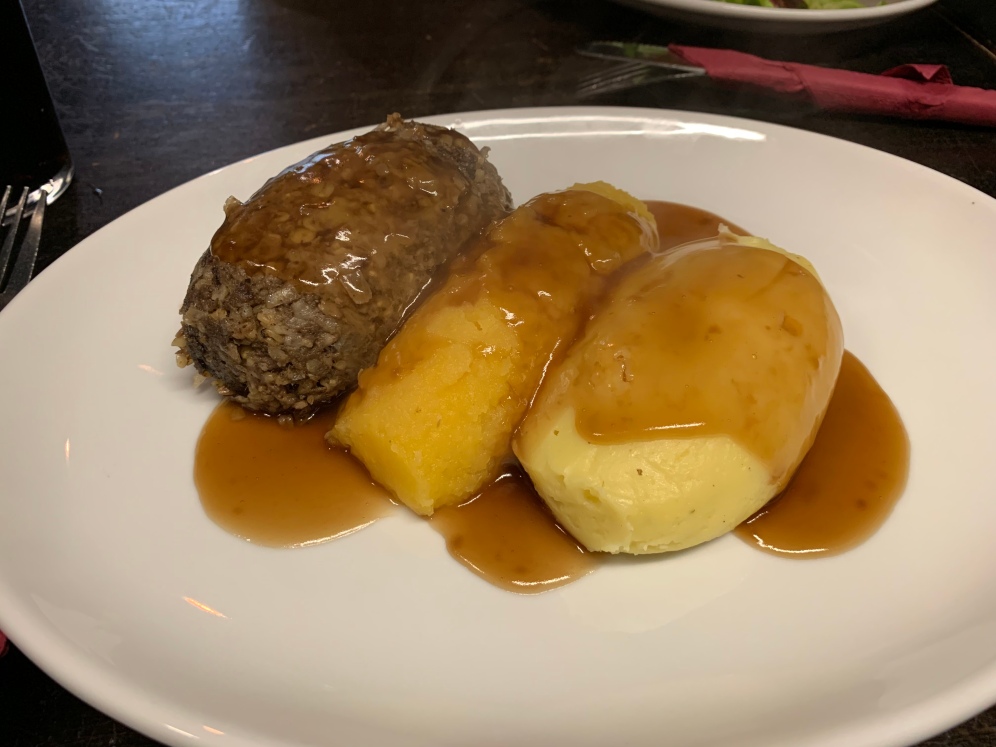 It’s time to talk about haggis. I will freely admit that the idea of what haggis is and how it’s portrayed in America really does this food a disservice. I was so completely put off by the idea of it that I didn’t want to try it. My friend Kate convinced me to give it a try and it turns out I love it.

We had haggis in a variety of different ways – fried into bon bons for appetizers, as a topping for nachos, I had it traditionally served with neeps and tatties (rutabaga/swede and potatoes) and gravy all over in a pub that was built in 1705, and my friend even had a massive slice on it served on a burger in that same pub.

I’ve heard about Nando’s (Peri Peri Chicken) being talked about a ton on social media. So while I was in the UK, I had to try it. They have a nearly overwhelming amount of ways to have their chicken served up as well as numerous sauces in various degrees of spice to pick from and taste. I did my best to try them all and had a few favorites.

In my opinion, it was delicious food and the chicken was tasty as was their variety of sauces…but I think I’m missing what the obsession is about. I don’t think it’s something I’d go out of my way to eat – especially since there are a vast variety of other places to pick from and limited time for me while on vacation there. 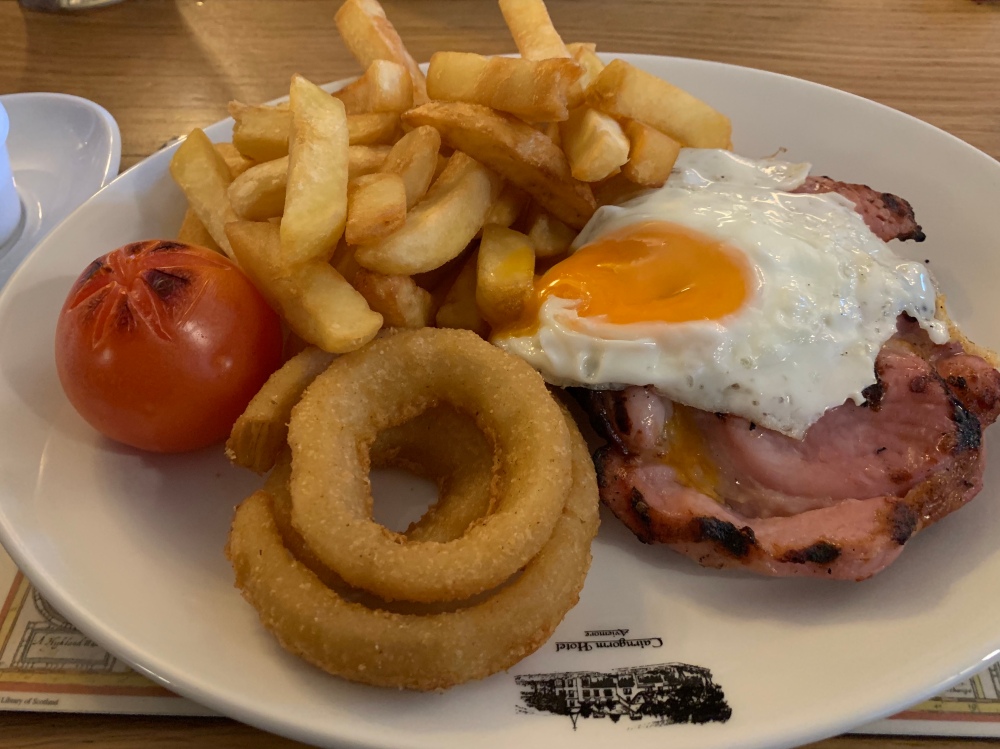 Another thing that was hit or miss for me was gammon steak. It’s a dry salted or brined piece of ham that’s usually served with eggs, chips (fries), and other bits for a meal. I had it at a restaurant and it was too salty to eat – so overly salty that nothing helped to tame down the assault on my tongue. I had it again later on and loved it since it wasn’t overly salty. Would I give it a try again? It depends on the situation. If I’m at a restaurant, I would more likely choose something else from the menu. If someone makes it for me at their home, I’d happily eat it. 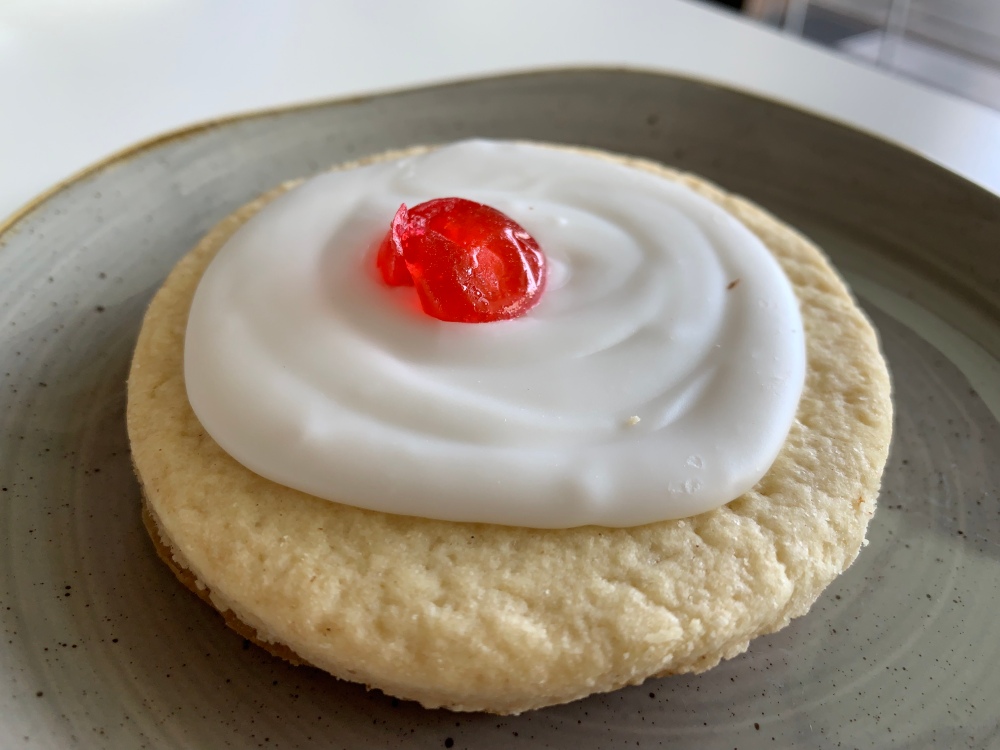 One of the few baked treats that I purchased and enjoyed was an empire biscuit. I never had or heard about these before! It’s basically two shortbread cookies with cherry or some other berry/fruit jam sandwiched between them, topped with an icing and a glacé cherry on top. It was tender, crumbly, not overly sweet, and delicious with hot coffee.

During my trip, I had Scottish smoked or cured salmon in a variety of ways – in sandwiches, topping salads, as it’s own dish served with rye crackers, and so much more. I love salmon and it’s one of my favorite fishes to eat, so to have it so fresh and done in various ways that different restaurants serve it was delightful to me.

It’s no surprise that people in the UK love their chips…So much so that Chinese restaurants offer up salt and pepper chips! I was surprised to see this as it’s not something I’ve ever seen offered anywhere else, but it’s delicious! Just like salt and pepper prawns/shrimp or chicken, it’s fried chips that’s then tossed with salt and sliced hot peppers. Chips were also served with lasagna – something else that I’ve never seen before, but Kate made sure to inform me that if there were no chips with lasagna, there’d be riots and the restaurant would be put out of business. 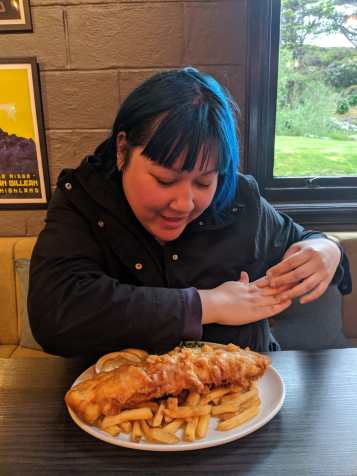 Of course, I had fish and chips! The restaurant that I chose to eat this ate served up fish the size of my forearm from elbow to wrist. I tried my best to eat it all, and couldn’t. But it was still delicious and everything you thought it would be with a light, crispy batter that held the malt vinegar in a way that didn’t make it super soggy.

To end this on a sweet note…I had a soft-served ice cream cone with a flake bar. It’s a personal favorite of mine and always a must when I travel to Europe.

For the sake of length, I didn’t get into all the packaged snacks, sweets, and beverages that I had on this trip. Maybe that can be a different write up if anyone is interested in knowing my opinions on what I did have.

To sum this all up, very delicious food was had. Some meh food was had. I have new food obsessions. I have many food recipes I want to try and make to fit the ingredients available to me locally. But mainly everyone should give something a try…even if they think they don’t like it. Especially if it’s a regional specialty because you’ll be surprised that when food is done traditionally, it’s something completely different compared to when it’s made elsewhere in the world. Also an idea of something is not actually representative to how it tastes. I’m sorry for ever being repulsed by you, Haggis!