Fried rice is one of those things that I don’t really have a recipe for. I never plan to make fried rice…and whenever I do make it, the creation tends to be based on whatever ingredients I have around. It’s also my default “end of the pay period” type of meal because you can make a lot of it to last several meals, you can use what you have on hand, and if you need to actually buy some ingredients, they aren’t very expensive. I posted a picture of my bacon fried rice on Facebook last week and several people were asking for a recipe, so I made it again to get the measurements of the ingredients. Woe is me, forced to eat bacon again!!

You start by cooking your bacon strips in a pan over medium heat until they’re mostly browned. It sort of goes through a weird stage where all this water comes out of it, but that quickly cooks off and the bits start to brown up in the fat that’s cooked out. When it gets mostly browned, turn off the burner and drain most of the bacon grease (save it in another container for use in other recipes!). You want to leave about two tablespoons of the bacon grease in the pan so it can cook the rest of the ingredients.

Next, add in your diced carrots into the pan and cook over medium-low heat for about 10 minutes. This will crisp up the bacon further and ensure that the carrots are cooked to a tender-crisp texture.

Once the carrots are cooked, reduce the heat to low and add in the green onions, garlic, and black pepper to taste. Keep the heat on low so the onions don’t overcook. 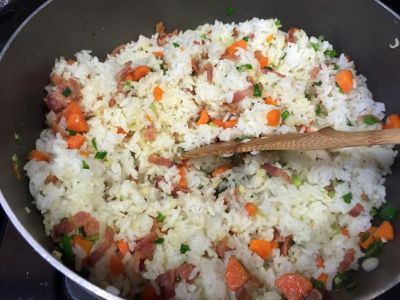 After cooking the garlic and onions for a few minutes, add in your cooked rice. Most people I know use leftover rice that’s been in the fridge. I like to use freshly cooked rice because it’s already hot and that means it cooks faster, which means faster eating. You can use brown rice, white rice, a mixture of both, long grain rice, short grain rice – basically any rice that you want.

Once you stir the rice around and ensure that all the bacon and veggies are mixed through it, you’ll add oyster sauce. You don’t add soy sauce with this recipe because the bacon is already salty enough. The oyster sauce gives it a bit of sweetness and a depth of flavor that’s a bit more savory than just something salty. They make a vegetarian version of this sauce that’s mushroom based if you want to use it instead – that’s for shellfish allergy, not because you’re trying to make this a vegetarian dish…Once you mix the sauce with all the rice, you let it cook for a few more minutes, and you’re ready to nom!

The leftovers can be kept in the fridge for up to a week. It’s easily reheated in the microwave. My favorite way to eat it is topping it off with Sriracha and having some pickled daikon (radish) on the side.