As with most things in life, I honestly didn’t plan for there to be a huge gap or break between my last recipe and this one. The coronavirus pandemic, and the state of things politically, really has been a doozy for so many people in so many ways.

For those that don’t know, I’m a news editor for my job and the pressures of everything happening in the news in addition to the pandemic stress really took a toll on my mental health. Especially since I still had to physically go into the newsroom for every shift since I’m an essential worker as a journalist and couldn’t perform my work from home. I ended up having to take the entire month of May off from work to focus on me because I reached a point where I realized that if I kept going and pretending I’m okay, then there was more than likely going to be some serious long-term psychological damage that I was going to do to myself. I’m in a better place now, but also not completely 100% in terms of everything. I’m no longer having multiple anxiety attacks every day and let me tell you, that has improved my quality of life so much.

A lot of people have taken on culinary projects while in quarantine, a lot of people were at home with extra time and decided to take on learning kitchen endeavors. It would have been a great time to churn out recipes and gain more traction with my recipes or this website! But it felt really weird to be pumping out recipes when there was and still is so much food insecurity – from a lot of ingredients being out of stock the first few months of “sheltering in place” as well as from people losing their jobs and income sources. It felt a touch tone deaf to me to slap on a happy face and present a new recipe I came up with. Not to mention that I rely on my coworkers help me eat the test batches of recipes and with most of them not in the newsroom, I stopped recipe testing to reduce food waste since I’m only one person and as much as I’d like to joke that I can eat an entire cake, I actually cannot.

I also felt like my creativity went out the window. I read several articles by psychologists that said during this pandemic, people’s brains had switched to survival mode where they’re just trying to get through each day since it’s been so extremely hard to predict or anticipate what’s going to happen next. In the articles, the doctors also stated that when your brain goes into survival mode, all other unnecessary functions go out the window – such as creativity. And all of this lead to a spiral of overthinking where it was easier not to do anything than trying to justify things (mainly to myself) as to why it was okay to be doing what I was doing.

I’ve been back in the kitchen, starting to bake things again, coming up with and trying out new recipes slowly. None of them are even close to needing to be shared, but it’s a good sign that I’m getting back on track…Or forming a new one where I deal with pandemic stress, work, and cooking all together. I even decided to be adventurous and try out something I’ve never made before: a French tarte tatin.

A coworker has an apple tree that finally bore fruits and he shared this bounty with me! The apples were small and cute and I thought they would look so pretty in a tarte tatin. I’ve looked at the ingredients numerous times before and it didn’t seem all that complicated, so I was pretty sure it wouldn’t be as much of a struggle as it actually turned out to be.

After six hours of four false starts where I burned or ruined sugar and butter due to wildly varying measurements and improper descriptions in techniques….along with a burnt thumb from way too hot sugar, I finally decided to not follow any recipe specifically and sort of wing it – as I usually do in the kitchen. I refused to waste another cup of sugar and stick of butter by trying out another recipe that would fail me. And at some point around midnight, I finally had a tarte tatin, or what I’m calling Frustration Apples now, for me to enjoy. Was it classically the French dessert? Probably not in terms of textbook definitions and techniques, but it was close enough. 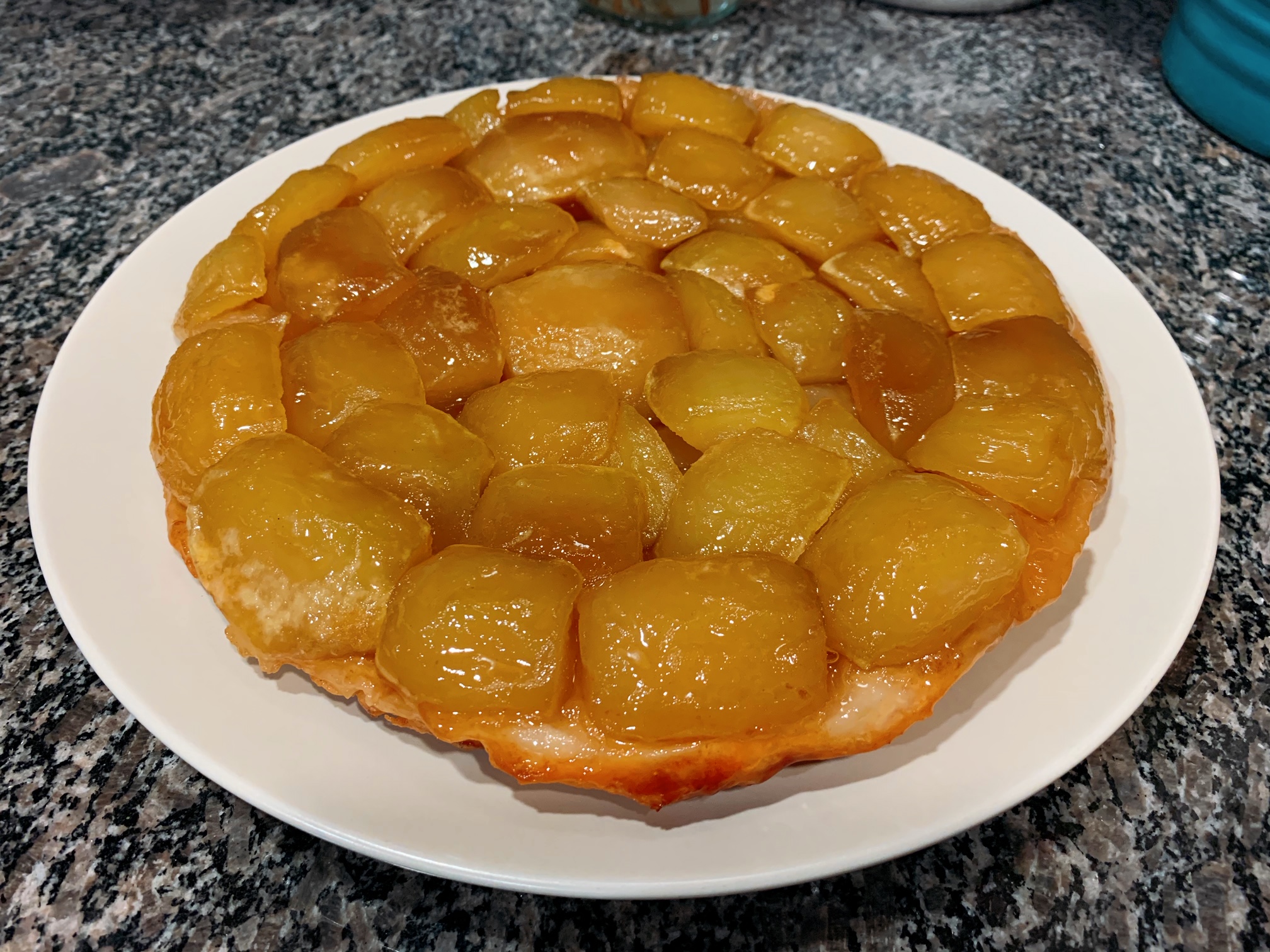 As I sat down, angrily chewing on these perfectly cooked gems of apples and caramel with a pastry crust, I was reminded that sometimes in life, you just have to do things your own way and the end results are what matters the most. Doing things how other people tell you to do them might result in failure because you’re not them. I’ve never been one to do things traditionally, so it makes sense that I would fail at every traditional recipe that I tried out.

I guess all of this was just a really long explanation as to why I went off the radar…and to drive home the point that you just have to do what it takes to survive and put yourself first if that means a healthier you in the long run.

I hope you’re all still staying as healthy and as well as can be, taking all the precautions that you feel is necessary to keep yourself, your family, and others around you safe. I’m still clinging onto the hope that we’ll all get through this and it’ll be okay eventually, even if our definition of “normal life” will be changed.