Two older ladies rent a house next door and they know I love to bake. Every once in a while, they would load up on cake mix at the grocery store and bring me a few boxes. While I’m appreciative of the gift, I’m never quite sure what to do with the cake mix. The obvious answer would be to make a cake, but I don’t like the texture of cakes made from box mix. To use up the most recent box that was given to me, I decided to make Black Forest cookies. To me, Black Forest is just a fancy name for cherries and chocolate. I’m sure there’s some long history on how that name came to be, but I don’t have time to look it up on Wikipedia since we have cookies to make!

All you need is a box of any type of chocolate cake mix (one that can make a 9×13 cake if you were following the instructions on the box), one stick of unsalted butter, two eggs, a pinch of salt, chopped dried cherries, chopped walnuts, and powdered sugar. Since the cake mix already has leavening agents, you don’t need baking soda or baking powder. Sugar is also already in the cake mix, so we don’t need to add more of it into the dough. 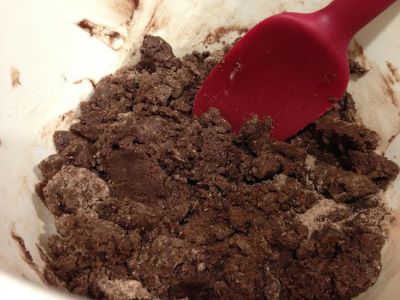 You add melted butter and the cake mix into a mixing bowl and stir it around until most of it is moist and it looks like damp soil.

Then you add in the two eggs and mix until the dough comes together. This takes a bit of work and halfway through mixing, I realized I should have used a wooden spoon that was much sturdier than a silicon mixing thing. If you want to toss this into your stand mixer or use a hand mixer, by all means do so.

After the eggs are mixed in and the dough easily forms into a ball, add in a sprinkle of salt, the chopped cherries, and walnuts. Again, it’s going to take a bit of work to get it all incorporated with the dough, but be patient and it’ll turn out fine. My favorite type of dried cherries are the ones pictured above from Trader Joe’s. They come whole, so I chop them so that they mix into the cookies easier. If you can’t find dried Bing cherries, any type of unsweetened dried cherries will be fine.

Once everything is mixed together, get about a heaping tablespoon of the dough and roll it into a ball. Then roll that into powdered sugar – this helps soak up the excess butter on the dough and makes a nice icing on the cookie as it bakes in the oven. Pardon my the gloves, I had sliced opened my index finger about a week ago and still have a bandage over the wound.

Once the cookies are rolled in the powdered sugar, place them on a baking tray lined with parchment paper and flatten them slightly. The cookies puff up slightly, but you’re able to place them closer together than with traditional cookie dough. Bake them for about 20 minutes and that is it! You have cookies to nom on. They’re slightly crisp on the outside, but nice and chewy in the middle…The cherries make them chewier and the nuts make a nice texture contrast.

This recipe makes approximately 30 to 32 cookies. If you don’t have dried cherries, you can substitute maraschino cherries – just be sure to rinse and dry them before chopping. The cookies may turn out sweeter compared to using dried cherries and the texture will be slightly different. If you don’t like nuts or are allergic to walnuts, feel free to leave them out or substitute with your favorite type!